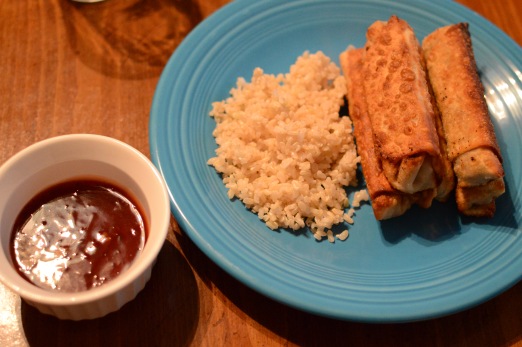 Don’t let the name scare you, these delicious morsels are the Filipino version of an egg roll and they are DELICIOUS. When people think of San Diego, they think “Mexican,” but there is such a huge variety of different backgrounds and cultures in California, I couldn’t even begin to describe them all to you. When I think of lumpia, I think of October. I know it doesn’t seem like a seasonal food, and indeed, none of the ingredients are seasonal, But I used to have this tasty meal at our former parish’s Fall Festival every year. I grew up going to Guardian Angels parish, and the feast day for Guardian Angels is in early October hence the festival. The Filipino women of our parish spend HOURS making these, months ahead of time. They would freeze their hard work, and them bring them out at festival time, fry them up, and serve them to raise money for the church. That is why lumpia = October to me.

It has been probably over 5 years since I last went to Guardian Angel’s fall festival. I haven’t attempted to recreate the recipe until this year, and I was wildly successful. The only hard part is rolling them as tight and as skinny as they are supposed to be. Unlike egg rolls, these are not supposed to be fat. In fact, they are supposed to resemble more of a taquito.

Besides that, they are surprisingly easy to make. Here’s what you need: