St. Lucy [or Lucia] is known as the patron saint of the blind and of light. Her feast day was yesterday, December 13th, and I told myself that this year we would hold off putting up our lights until her feast day. So, last night we had our very own little family light-up night. 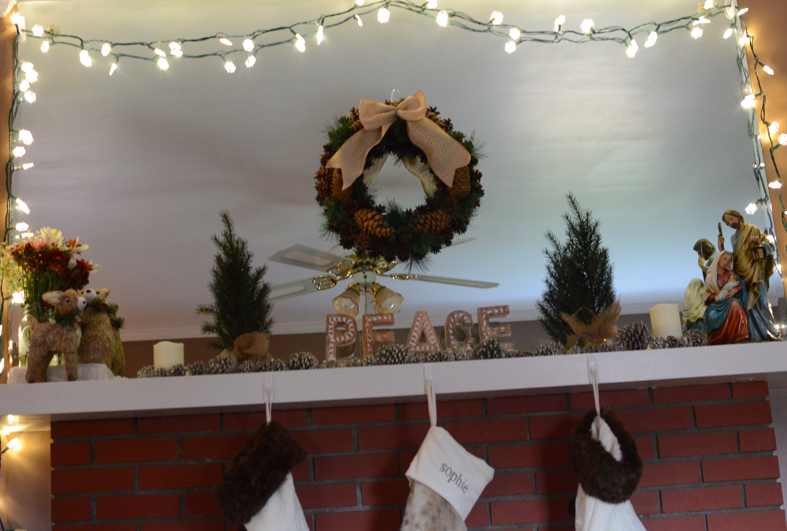 Here’s the story of St. Lucy that I’ve heard: Some time around 300 AD, it was actually dangerous to be a Christian. When most people think of Christianity, they don’t think about persecution and martyrdom. Yes, many people are quick to remember the crusades, but slow to remember that Christians, particularly in Rome, were hunted. In fact many Catholic traditions come from this time of persecution, when people had to celebrate mass in secrecy underground. Besides celebrating mass in the catacombs, Christians wanted by the Romans actually hid underground as well. St. Lucy would bring food to these people, since they were wanted and were too scared to show their faces above ground even to get some thing to eat. The story goes that St. Lucy had so much food to bring to these Christians that she couldn’t carry both the food and the candle she’d need to see in the underground tunnels. So, she placed the candles in a wreath that she wore on her head, leaving both hands free to carry enough food for everyone in hiding. There are probably many variations on this story and the historical facts that go with it… but either way, it is still a good example of charity, love, and the importance of religious freedom.

At the risk of sounding political, I have to say this story touched me in a very particular way this year, as I’ve seen many Muslims being persecuted here due to tensions our country has with those in the middle east, as well as the world-wide persecution Christians are facing. It highlighted to me how lucky I am to have religious freedom in this country and encouraged me to pray for those who do not have this gift in theirs.

In any case, it was an honor to light up the night in honor of the patroness of light herself. Now our home looks particularly festive, and ready for an even BIGGER feast day on December 25th! As you’ll notice, our manger is still missing Baby Jesus, and we’re still rocking our Advent flag near the front door. The anticipation is growing for both Christmas Day and for our trip to California. This week, I’ll be spending most of my time doing last minute shopping and packing for the big trip. Hopefully I will still have time to relax and enjoy the season. Have a great week everyone!