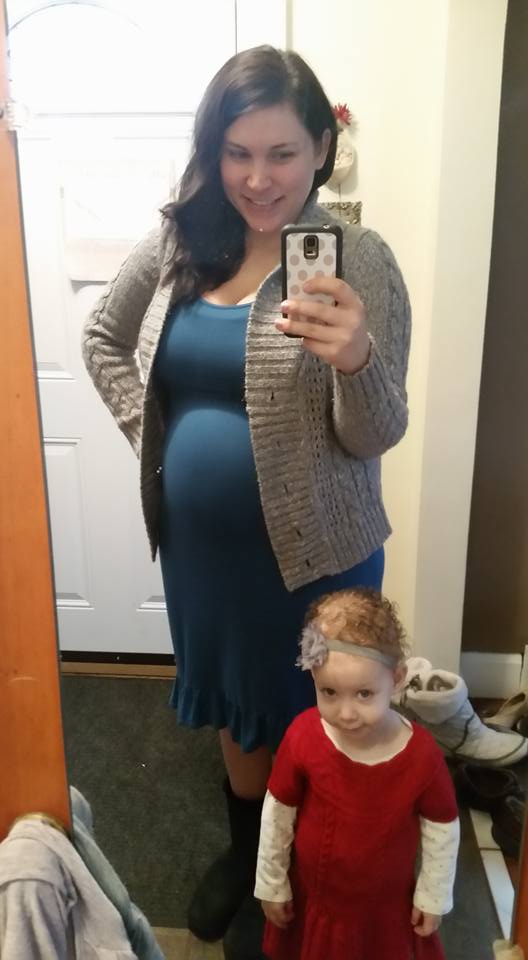 So I have a bump. You can even say it’s a baby bump, because – well – a baby made it. Let me rewind for you a little bit…

J and I got to have our first real outing last weekend. GG and Pap offered to watch both the girls, I left them some breastmilk and a bottle for Cora, and J and I left for Pittsburgh. When we had finished dinner, we decided to roam around the furniture stores near by. A saleswoman approached us and began telling us about the couch we were sitting on. Next, she discreetly pointed out where the women’s restroom was to me as I begged God not to let her ask me if I was pregnant. He answered my prayer, and I got to avoid that awkward situation with saleswoman #1.

Saleswoman #2 approaches, maybe 10 minutes later. Asks if we need help finding anything, and when we so clearly tried to shake her by saying “Oh, we’re just looking,” she goes for it. Full on, she takes the dive and says “Oh! I see you’re expecting!” and actually makes a hand gesture toward my stomach. Lord have mercy. In all fairness to the Lord, I didn’t utter a prayer for this saleswoman, so he’s off the hook. I politely smile and say “Well, we WERE expecting about a week ago. I just had a baby.” Of course this poor woman is mortified. Then, it’s like a little angel awoke her from a slumber and brought her into the world of female consciousness, where the cardinal rule is to not say anything #1 about a woman’s weight gain, and along that same thought process: #2 to never ask a woman if she’s pregnant.

And I was embarrassed. I was completely embarrassed… for her. I told her not to worry and that I literally just gave birth days ago. I said maybe a month from now I’d be mad at her, but to only be a few days postpartum? I could see that she had just made an honest mistake, and I meant it. I didn’t feel self-conscious. I didn’t want to run to the ladies room (which was so politely highlighted to me) and cry. I actually felt bad for the woman who pointed out my enormous belly.

You see, I don’t feel the pressure. I don’t have a burning desire to lose my baby weight right away. With Sophie, I was doing every exercise the doctor could clear me to do, where this time around, I am just taking my time adjusting to being a mom of multiples. Having a routine with the girls, time with my husband, and time by myself are my biggest priorities. Do I want to look like a supermodel? I’d be lying if I said no, but that’s always going to be the answer whether I’m 1 week postpartum, or in the best shape of my life (c’mon, no supermodel is 5’2″ ) However, there are more important things in my life then “getting my body back,” and I refuse to feel shamed into rearranging those priorities. Hence, the feast my husband and I enjoyed just before heading to said furniture store: 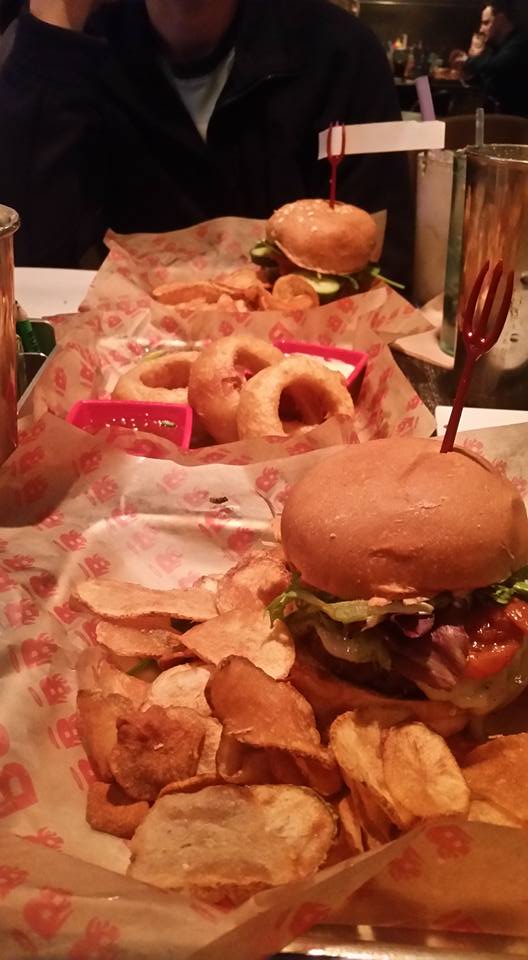 Of course I’m self conscious about my stretch marks, stretched out tummy, and other results of having grown a human for 9 months… but last weekend I laughed harder than I had laughed in a long time. I felt fresh, like the 19 year old I was when I first met J. I felt free and happy, and refreshed. As self conscious as I can be in those quiet moments, the happiness I currently feel mostly drowns out those doubts. My life is simpler. I feel beautiful with less make up, put together in what my former self would’ve considered “dressed down,” and it doesn’t take as much to put  a smile on my face as it once did. If anything, my children have taught me simplicity and to not sweat the small stuff, which includes the size of my postpartum belly bump.

So if you’re a new mom, try not to focus on what any one else thinks. Who cares if a stranger thinks you’re pregnant, or some one you know thinks you’ve “let yourself go.” Just focus on being the best mommy you can be. If that involves a morning jog, great. If that involves cuddling on the couch with your toddler so she doesn’t get jealous of her new baby sister, also great. This mothering gig is hard enough, don’t make it harder by imposing beauty standards on the job.